A week after Thanksgiving, I was growing weary of looking at the winter squashes that had been staring at me from the windowsill for over a month. I initially put them there to inspire me to make a clever Thanksgiving centerpiece, but instead, they became a constant reminder that I had never gotten around to decorating with them. Or cooking them. I was over squash.

The question was, do I cook them, freeze them, or put them in the compost where my chickens could happily devour them over the winter? That’s one of the nice things about having chickens, they are the ultimate assuagers of guilt. If you don’t get around to eating food, the chickens are ready to step in — and they give you eggs for the trouble. 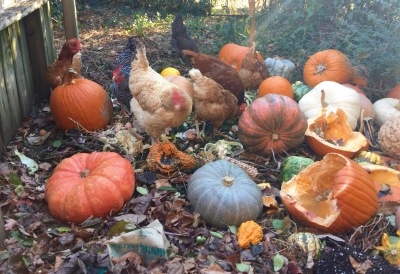 In the end, I roasted a variety of squashes, scooped out the flesh, and froze it.

Recently, I had a marvelous lunch with a few girlfriends. Each of them ordered butternut squash soup. I took a taste. It was delicious. I decided I would make butternut squash soup with the frozen squash. I had a rich homemade Chicken Stock from Rotisserie Chicken Bones in the freezer to use for the broth.

Yield: 12 cups of a hearty soup. You could have more volume by thinning the soup with extra chicken broth.

To Roast Squash:
To make this soup, you will need to roast the winter squash first. Cut the squash in half and scoop out the seeds and fibrous pulp. I used acorn, butternut and Seminole pumpkin squashes. As described in this post, microwave the butternut squash to make it easier to slice. 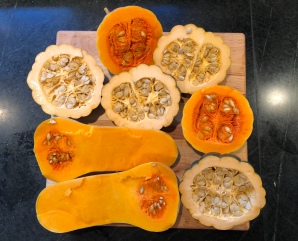 Use a silicone basting brush to swab the squash halves with olive oil, sprinkle with sea salt, garlic pepper, and“Trader Joe’s Everything But The Bagel Sesame Seasoning Blend.

Place on a parchment-lined baking sheet in a 425º oven. Cook for one hour. 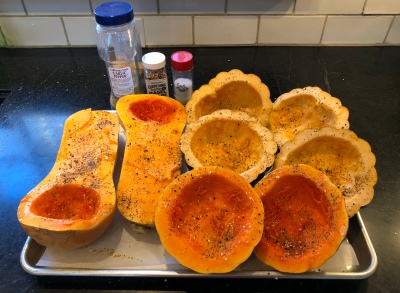 Let cool for another hour and remove the skin and any remaining stringy pulp. I packed and froze the cooked squash.

To Make Soup:
I had never made squash soup before but started by doing what I always did when making soup, I sautéed onion and garlic in olive oil over medium-low heat until they became soft and translucent – about 15 minutes. 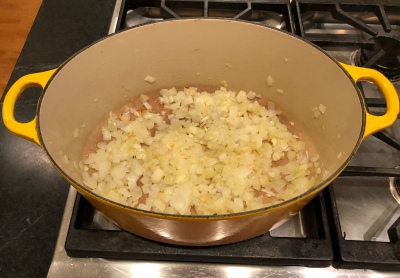 Next, I added the mushy roasted veggies. If you desire a hearty soup, as I did, there is no need to puree the squash first. If you are looking for a daintier soup, or one with a more uniform consistency, purée the squash.

Stir in the broth and bring the soup to a boil. Simmer for 20 minutes. Season to taste before serving. I only needed to add one teaspoon of salt and no pepper because the roasted vegetables I used had already been well-seasoned. 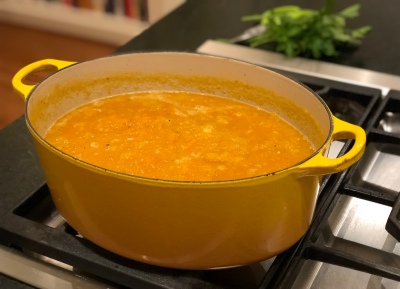 Serve with a sprinkle of chopped parsley. You could add curry or ginger powder if you want to add more flavor, but I love the robust taste of roasted veggies. 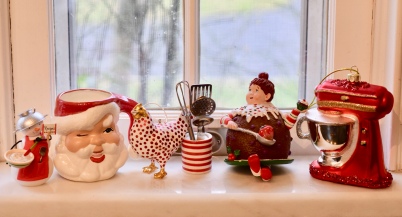 Always check the website for the most current version of a recipe.

If you enjoyed this post, please sign up to be a subscriber! Once you sign up, be sure to confirm the subscription on the confirmation letter sent to your email address.