Treating our baby chicks like pets and naming them seemed like a good idea. At first. They were cute and cuddly like pets, and they kept us entertained with their constant chirping and the adorable way in which they climbed over one another to get to their food. We had fun choosing names for that first flock, too: the two brunette Plymouth Barred Rocks were named for my Sicilian grandmothers, Marion and Concetta, the blonde Buff Orpingtons for Hubby’s grandmothers, Alice and Mildred, and the Rhode Island Reds for my zany red-headed great aunts, Bridget and Josephine. Neighborhood children and adults visited every day. Life was good.

The chicks grew up to be a beautiful and sociable flock. They loved to climb the stairs to our back porch and hang outside the screen door while we humans visited inside. This was back in the Spring of 2012 when the Metropolitan Government of Nashville first passed the Domesticated Hen Ordinance allowing urban residents to keep up to six chickens in their fenced-in backyards.

In the beginning of our poultry husbandry, it was all cartoonish chickens running across the grass in their funky lopsided way, and chicken idioms come to life. After about five months, eggs started appearing in the nest box, and it seemed like a happy bonus rather than the original intent. A few years later, with the addition of blue-egger Ameracaunas to the flock, the variety of eggs became downright gorgeous.

Eventually, the Circle of Life, Survival of the Fittest, Mother Nature, whatever, showed its hungry head and there was some attrition in the happy flock. 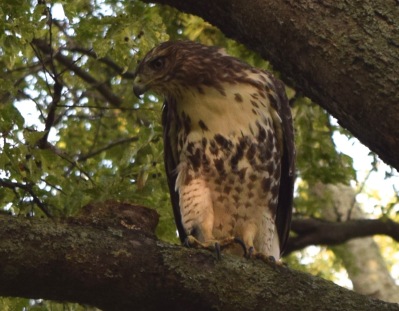 I didn’t grow up on a circle of life farm, so when the hawk picked off the first few chickens, it took me a while to adjust. The chickens adapted to this menace better than I; they learned to run for cover whenever they heard the hawk’s whistling call or saw his shadow overhead. They also learned to make a beeline for the bushes when I let them out in the morning to avoid being out in the open where a hawk could easily spy them. They were smart chickens.

As there was more attrition to come, at some point, I had to stop naming the replacement chickens. Instead, I referred to them by their breed. That is, until last Spring, when I brought my newly acquired Golden Comet chicken to visit Glendale Elementary School in Nashville. There, a young girl in Ms. Meadors’ kindergarten class raised her hand and asked me the chicken’s name.  I hemmed and I hawed. How could I tell this darling child I didn’t name my chickens anymore because Mother Nature could be ruthless? “Comet,” I replied with a motherly smile. The name stuck.

Last week, Comet, the only chicken in the flock who liked to be held, died. This is a tribute to her.

Comet was born on a rural farm in Kentucky that raised Golden Comets, a breed known for being good layers. Once the baby chicks were hatched, they were placed in an open field in movable cages known as “chicken tractors.” The chickens fed on the grass beneath their feet until it was all consumed and then the cages, with their big supporting wheels, were rolled to another area of the field. 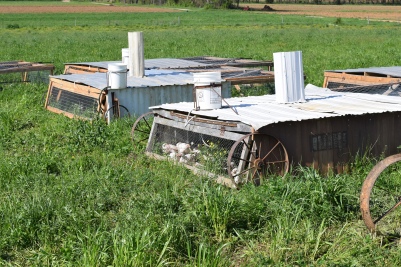 Once the chickens outgrew the tractors, they were moved to a fenced-in apple orchard for grazing. The canopy of apple tree branches helped protect the flock from hawks.

I asked the farmer, whom I knew from previous visits to the farm to buy eggs, if he would sell me two of his young layers. He did so with some reluctance — I don’t think anyone had ever asked him that question before. He sent his son to fetch two chickens. The young boy, obviously adept at this task, snuck up on the chickens and grabbed them by the ankles. 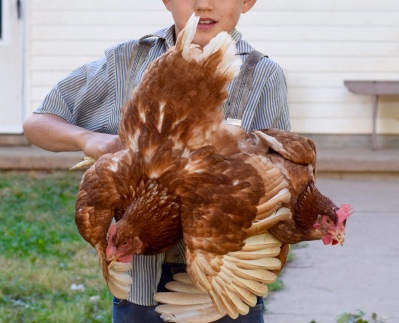 We brought the chickens home and waited until nightfall to introduce them to the established flock. This is a time-honored technique used to decrease the likelihood of new birds being hen-pecked by older girls in their society. The idea is that the birds all wake up together and are not as startled by the presence of the newbies among them. We’ve learned from experience this method doesn’t always work, so for added insurance, we bought a “flock block” and placed it in the enclosed run with them. We hoped it would give the birds something enjoyable to peck on rather than each other.

It worked; the older ladies left the new girls alone. We have since discovered that as long as we keep a second food source in the run, the chickens have less reason to be territorial. There is now peace in our small chicken kingdom. 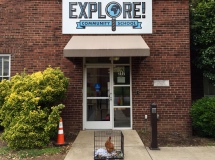 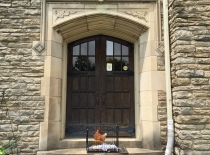 Comet got to visit many schools. There is no telling how many children stroked her golden-red feathers or touched her rubbery red comb.

Here is Comet in Ms. Benson’s kindergarten classroom where children got to feed Comet leafy greens and pea shoots with their soft leaves and curly-cue tendrils. 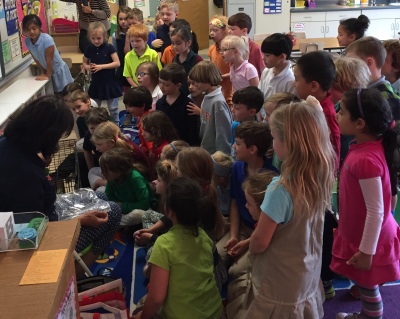 The Boy Scouts came to visit her.

And, the Girl Scouts. 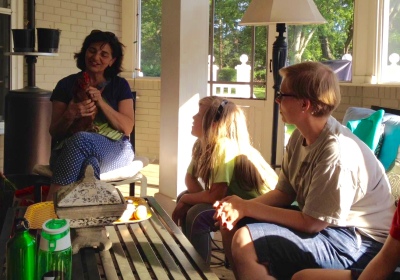 The scouts all learned How to Tell If an Egg Is Fresh or Hard-Boiled. You can learn how, too, in the video located in that post.

Comet and I were featured in a photo shoot for a nationally known online knitting magazine called Mason Dixon Knitting. I adore this photo of Comet taken by my dear friend and neighbor, Ann Shayne. Ann later gifted me with the beautiful purple and raspberry colored handknit cowl. 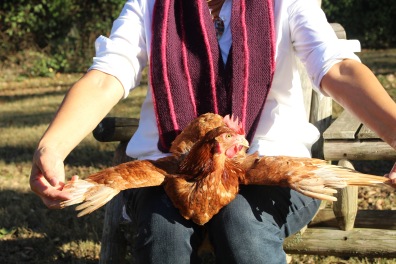 A few more remembrances of Comet.

Here she is eating her leafy greens and peas.

Tilling and munching in the compost pile.

Visiting while I planted an asparagus bed. 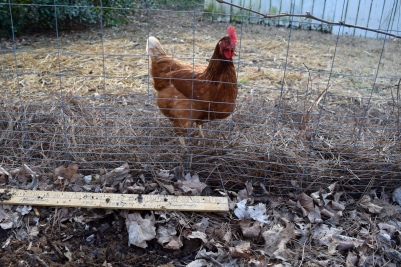 Taking in the scuttlebutt at the watercooler.

Leading the charge as the flock followed me around the yard. 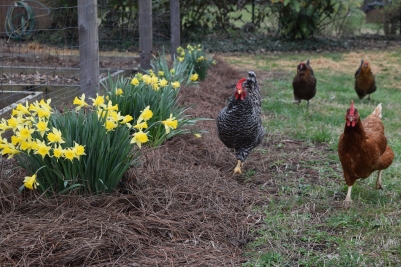 Comet was one fantastic chicken.

In Memory of Comet:
50 Ways to Make a Frittata
Quiche Lorraine with Bacon and Kale
Freshly Cooked Tortillas