Some of the memories of our trip to India will surely fade but not this one.

This view, seen through the red sandstone Great Gate of the Taj Mahal Complex, appeared surreal in the early morning haze enveloping Agra. It was the most stunningly beautiful sight I had ever seen. My husband and I crossed the threshold of the Gate, and suddenly we had an unobstructed view of the Taj Mahal — and the gardens that led to it. We were smitten — with the view and each other. 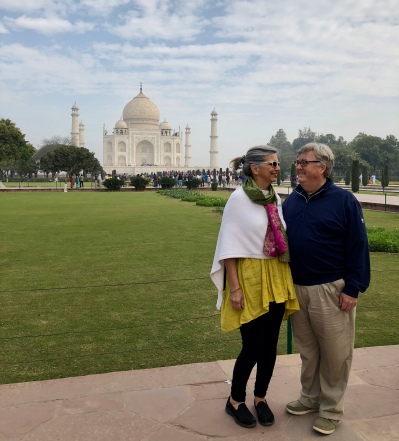 Thirty-five years together will get you a look like that now and then. Out of nowhere, I started humming the dramatic love theme from The Godfather. This wasn’t the first time I’d been moved to hum, but it was the first time I had to ask my husband what I was humming! I surely had to push deep into my brain synapses to come up with that song from 1972, but it did express the beauty, love, and drama I was feeling.

The Taj Mahal is a mausoleum built by the Mughal emperor, Shah Jahan for his third and favorite wife Mumtaz Mahal who died during the birth of their fourteenth child in 1631. Construction began in 1632, and the entire complex was completed in 1653. Following the Shah’s death in 1666, he was buried beside his wife.

As we moved closer, the view became more splendid and ethereal. Our guide pointed out the Qur’anic verses that the calligrapher had inscribed around the arch of the mausoleum by inlaying jasper, a type of quartz, into panels made of marble. An optical trick was employed by the calligrapher to make the letters look equal in size as they are read from the bottom up and from right to left. He subtly enlarged the letters as they got closer to the top of the arch.

I love how the architects found a way to ensure that perpetual floral arrangements lined the entranceway to the inner sanctum of the Shah’s wife’s final resting place. No photos were allowed inside, but the mosaics made with semi-precious stones (coral, onyx, carnelian, amethyst, and lapis lazuli) and low relief marble panels of stems of flowers continued throughout the interior of the building.

The Taj Mahal backs up to the Yamuna River.

The mausoleum is flanked by identical red sandstone buildings for architectural balance. One building is a mosque, and the other was described as a guesthouse. Four ornamental minarets surround the Taj Mahal.

A view of the Great Gate from the terrace of the Taj Mahal, a distance of 1000 feet. The gardens exemplified paradise. 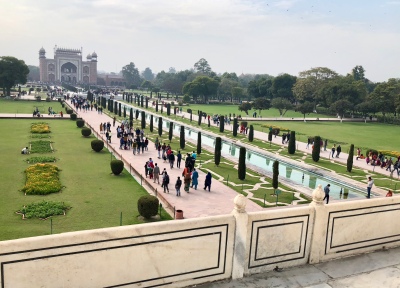 A Map of the Taj Mahal Complex

We left the Taj Mahal and took a horse and buggy ride to the Agra Fort, the walled, imperial city of the Mughal Emperors. The Fort was built by Akbar, the first Mughal emperor, between 1565 and 1573.

Akbar’s grandson, Shah Jahan, added the white marble Diwan-i-Khas or Hall of Private Audience in 1635. It was used as a place to welcome kings and nobles and conduct important affairs of the state. The mosaics are similar to those found in the interior space of the Taj Mahal. 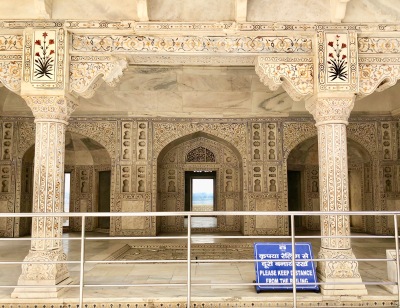 Shah Jahan was later sentenced to lifelong house arrest by his son and imprisoned in a room with a view of the Taj Mahal, as seen in the photo below. (Our guide was obsessed with taking pictures of us.) On the right of us is another view of the Diwan-i-Khas. I read that the structure is only covered in white marble. Underneath is red sandstone. 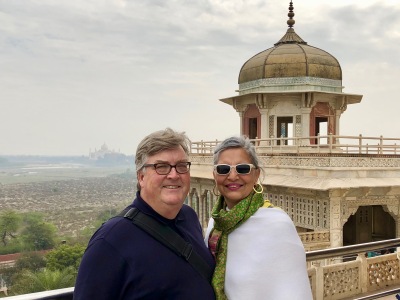 I was obsessed with the photo technique I learned the day before for taking photos of mosaic ceilings. I taught it to our guide!

As soon as we finished our tour of the Agra Fort, our driver, Ravi, bee-lined it back to Delhi so we could enjoy dinner at the home of a Nashville friend now living in Dehli, Reed, and her sweet husband, Arjun. We were served the most colorful and flavorful of meals, the perfect ending to an equally colorful and sensual tour of the Golden Triangle.

I asked Reed to name the foods served to us for this Kashmiri feast: “On your plate, you have lal tomater paneer, gobi (cauliflower) yakhni, dum aloo (potato), rice, two chutneys- walnut radish & mint. There’s raita up at the top, that boondi anar (pomegranate) raita, red kidney bean (rajma), and all the other tidbits are achaars (pickled fruits or vegetables), and there’s pickled onion.”

Reed and Arjun, both work with Wildlife SOS, an organization that rescues, rehabilitates and re-releases (where appropriate), injured and exploited animals from all over India. Once relieved of their labors, some of the rescued animals live out their lives with Wildlife SOS. Reed told me their organization has spent time educating elephant and camel ride operators throughout India on the most humane ways to treat and care for their animals. Donations are always welcome for the care of these animals.

It was a true joy to sit and visit with Reed and Arjun in their Dehli living room after so many nights of living in hotel rooms — a beautiful way to end this leg of our trip.

Next up is our tour of Hyderabad in Southern India where we shopped for saris, visited a family farm, and took a bus tour of the city. For now, I’ve got to get my spring vegetable garden planted!

If you enjoyed this post, please become a subscriber! Be sure to confirm the subscription on the follow-up letter sent to your email address.

© 2014-2018 Judy Wright. All rights reserved. Photos, videos, and text may only be reproduced with the written consent of Judy Wright.