I recently stopped by my daughter-in-law’s house to visit her mother, Viji, and her grandmother, Hema. Knowing how much I love her cooking, Viji, whose kindness and generosity know no bounds, asked if I was hungry and offered to prepare a bowl of biryani and rice for me. I gratefully accepted.

Usually, when Viji makes biryani, she serves it with a bowl of raita, a refreshing yogurt-based condiment that tempers the spices in biryani. This time, Viji offered a bowl of plain yogurt (known as perugu in Telugu) which she often serves over rice and curries. I scooped up a few spoonfuls and poured them over the biryani. As I licked the spoon, I was struck by how sweet, tangy, and light her batch of yogurt tasted. It was unlike any yogurt I had had before. I asked Viji what brand it was and she told me she made it herself. As soon as she said the yogurt was homemade, my hand was already searching the depths of my purse for a pen and a piece of paper. I had to learn how to do this. 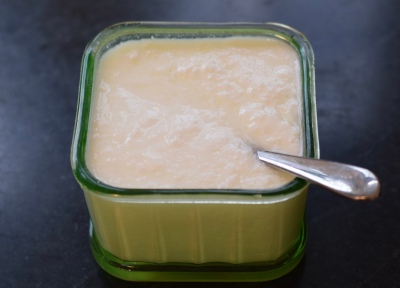 Viji explained how making yogurt was something she and her family have been doing almost daily their entire lives, both in India and in the United States. In describing how she made it, she didn’t use off-putting words like “live cultures,” “starter,” or “fermentation.” Instead, she told me simply to heat milk in a microwave until just before it starts to boil, allow it to cool until you could comfortably stick your finger in it (not scalding and not lukewarm — somewhere in between). When it got to that temperature, I was to add a spoonful of yogurt from the last yogurt batch, stir it, cover it with plastic wrap, and put it in the warmed microwave to set undisturbed overnight; it would be yogurt in the morning. 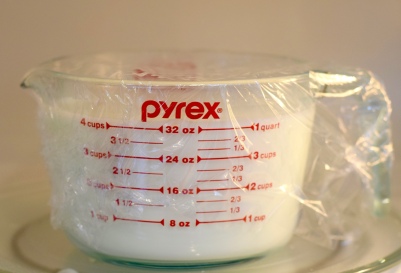 She sent me home me with a small jar of yogurt for “starter” and an encouraging smile. Here is a photo of Viji and our daughter, Meera, from a cooking class they taught to Meera’s friends a few years ago.

I made my first batch that same evening. When I checked the microwave the following morning, the preparation had thickened. I had made yogurt! I felt so accomplished. Surprisingly, it tasted exactly like Viji’s batch: sweet, light and tangy. Delicious in its plainness. Out of sheer delight in creating something as universally known as yogurt,  I proceeded to share a few spoonfuls with everyone who walked in the door for the next few weeks.

How does milk become yogurt?

Milk is made of water, fat, proteins, minerals, and a milk sugar known as lactose. When the milk is heated, its native bacteria are killed. As the milk cools and the new, live bacteria in the starter culture are introduced, the new bacteria feed on the milk’s lactose (sugar) and turn it into lactic acid. As it does this, the milk is transformed, or ferments, into a soft curd — yogurt.

It is a very simple and time-honored process. People have been making yogurt, kefir, and cheese from milk, using bacteria, yeast, or fungi, for thousands of years to preserve milk’s shelf life. It is only in the last one hundred plus years, with the advent of refrigeration, that people have been able to store milk in liquid form in their homes.

The Starter Culture
You can make your own yogurt using a starter culture that has been given to you, as I did, or you can buy commercially prepared yogurt with “live” or “active” cultures from the grocery store. To make this recipe replicable for readers,  I purchased four different commercial brands of plain, unsweetened yogurt to test the process and each brand worked. As long as the container of yogurt has these two live bacterial strains listed, you will be able to make yogurt: Lactobacillus bulgaricus ( L. bulgaricus) and Streptococcus thermophilus (S. thermophilus). Other strands of bacteria are often added by manufacturers to create the unique taste and texture of each brand.

This label is from a container of Trader Joe’s plain yogurt.

This label is from a container of Desi, a nice plain yogurt I bought at Patel Brothers, a fabulous Indian grocery store on Nolensville Road in Nashville.

All four brands of yogurt produced a semi-solid yogurt that tasted identical to the batch from which the starter came. Words to the wise: be sure you like the taste of the plain yogurt you choose because that is how your homemade batch will taste.

The Milk
Any whole or reduced-fat milk will do. You could also use soy or coconut milk, although I have not tried these. 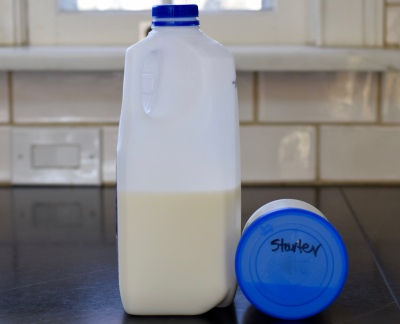 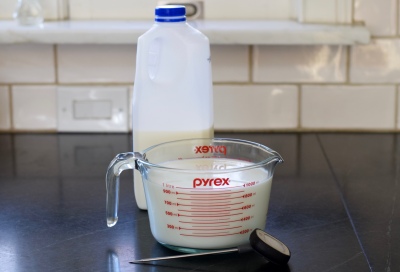 Heat milk uncovered in the microwave, or on the stovetop, until it reaches 180º. In my microwave, this takes nine minutes. If you do not have a digital thermometer, heat milk until it just begins to boil. Do not let it boil over. 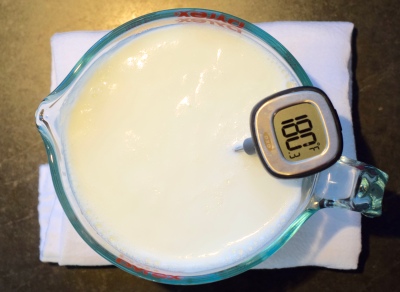 Remove hot milk from the microwave to a padded surface and allow it to cool to 115º. 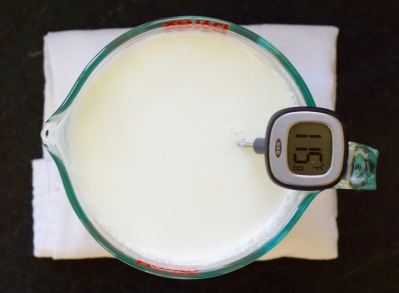 Add a spoonful of yogurt starter and stir. I add one tablespoonful of starter when using four cups of milk and a heaping teaspoon when using two cups. Cover mixture with plastic wrap and let rest, undisturbed, for 8-10 hours in a warm, dark place like a microwave, an oven, or on a shelf in a kitchen cabinet.

If it doesn’t set, let it sit a little while longer. For some reason, it took twelve hours for one of the brands to form a curd. I am not sure why, but it did eventually set. Once set, refrigerate the yogurt. Be sure to set aside a small amount to use as starter for the next batch! 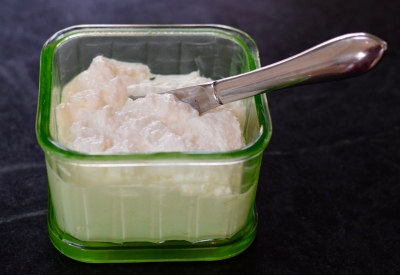 The resulting soft cheese is delicious spread on bread and topped with honey or preserves. 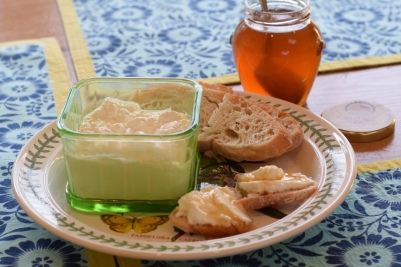 Or, it can be served as a savory dish and spread on pita or toast and topped with olive oil, freshly chopped herbs, slivers of green onion, sea salt, and freshly cracked pepper. The flavor is amazing! 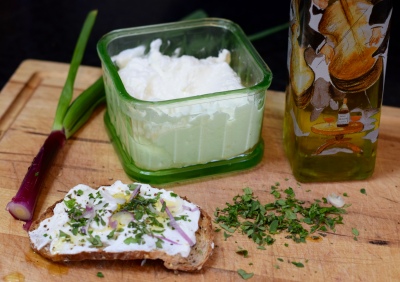 To make yogurt cheese, I place a cheesecloth over a fat-separator which has a built-in colander. You could also line a regular colander with cheesecloth. 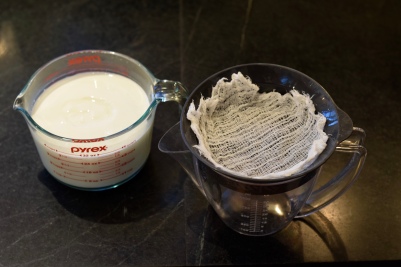 Allow yogurt to drain for a few hours or overnight in the refrigerator. 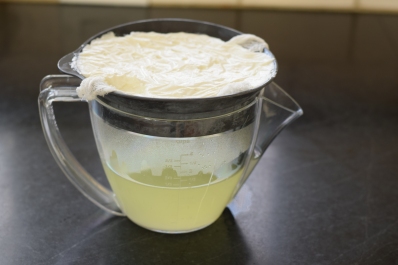 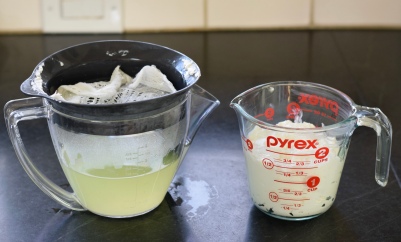 I’ve been making two batches of this yogurt cheese, which is rich in protein and calcium, every week for the last month. Our family cannot get enough of it. The good news is if you don’t feel like making your own yogurt, you could buy commercially prepared yogurt and drain it. 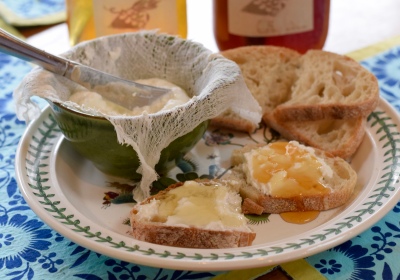 Toast and yogurt cheese are delicious served with one of these preserves, too:
Roasted Strawberry with Rosemary Preserves
Crabapple Jelly
Grape Jelly

25 thoughts on “How to Make Greek Yogurt at Home”