As I write this, I am sitting in an airport in Fort Lauderdale when I hear an unexpected last call announcement for a flight about to depart for Cuba; the gate is closing. The announcement takes me by surprise, especially on this day, after a most memorable visit to a bomb shelter built for a president and his family in the aftermath of the failed Bay of Pigs invasion when all gates to Cuba were most definitely closed.

This story is about my visit to the Kennedy Bunker, an underground fallout shelter in Florida. The shelter was built in December 1961 before President John F. Kennedy’s visit to Palm Beach for a Christmas holiday with his family. It is a stark reminder of the Cold War. A sister shelter was built in Nantucket.

I put together this brief, selective, timeline of the historical events surrounding this bunker’s construction. I had to when I read that JFK gave a speech in October 1961 urging all Americans to build bomb shelters in their homes “as rapidly as possible.” Can you imagine such a speech today? There would be pandemonium amplified by a kazillion wireless communication devices.

The bunker entryway was built into the hillside and covered with twelve feet of bags of concrete mix and dirt. It was meant to be a radiation proof safe haven for the President from which JFK and his entourage could lead the country.

As I walked into the dimly lit 40-foot long corrugated steel tunnel, I was immediately struck by a twilight zoney sense of the reality of a tense time in our geopolitical history. 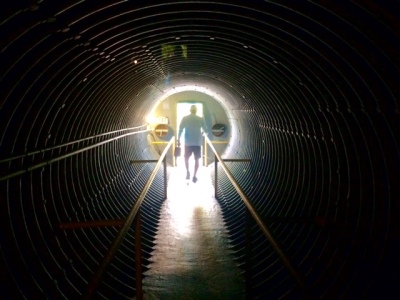 I had a flashback to 1962 when as a kindergartner in Baltimore, only forty miles from Washington D.C., we practiced Duck and Cover drills in the classroom.

As children, we knew, sort of, what this sign on public buildings meant. 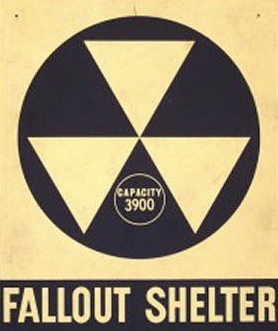 I’ve since learned the six black and gold triangles depicted in the sign stood for shielding from radiation, food and water, trained leadership, medical supplies, communication, radiological monitoring, all focused jobs of the Office of Civil Defense.

Some of the mechanicals in this Peanut Island shelter:  a generator and an air handler. 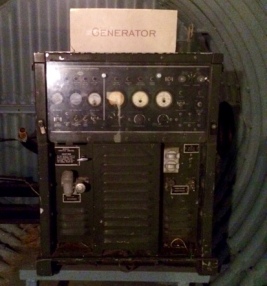 Before taking two 90-degree turns to get to the living quarters, one would do a radiation check. If you tested positive, you rinsed off in the decontamination shower before proceeding. I had a vague memory that radiation couldn’t turn corners, so entranceways to bomb shelters always include a maze of concrete walls through which to navigate. If you had a bomb shelter in your home while growing up, please tell us about it in the comments section. 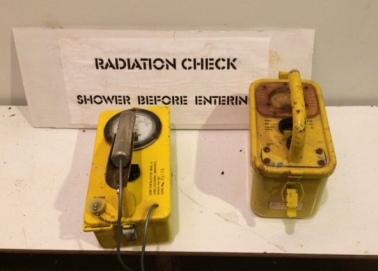 The living quarters. Walking into this room blew my mind. The artifacts, some original, some not quite accurate for the time period, instantly put the gravity of the Cold War into perspective.

Note to viewers: as striking as it is, I’ve read the presidential seal on the floor was not original to this bunker.

Another view of this room from a fellow traveler, photographer Kay Ohto who kindly allowed me to use his photos for this post. Assume that all the good photos were taken by him. He understood how to shoot photos in minimal lighting.

Bunk beds and lockers for the family and entourage. Originally, there were 15 sets of bunk beds.

An army-issued desk and chair. Most of the items on the desk are not original.

Here is another view. BTW, the red phone, aka “the hotline,” is just a prop. There was a direct line between Washington and the Kremlin, but it was through a teletype. The red phone only happened in the movies.

Thinking about movies, if you want a refresher course on The Cuban Missile Crisis, watch Thirteen Days. My husband and I just watched it and literally sat on the edge of our seats throughout most of the second half. It was JFK’s finest hour. 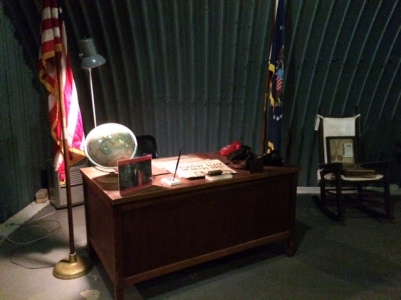 The kitchenette with lead-lined containers of water and boxes of MRE’s, Meal Ready to Eat. 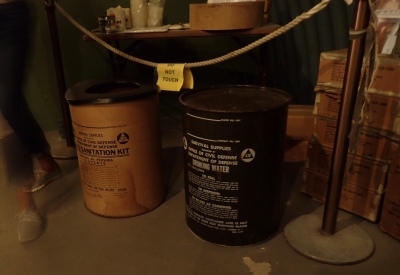 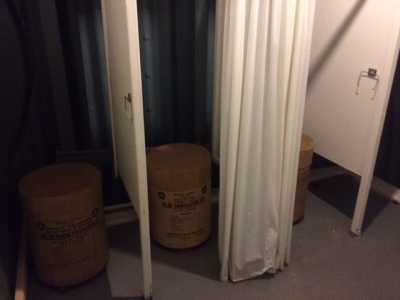 There was an escape hatch, too. 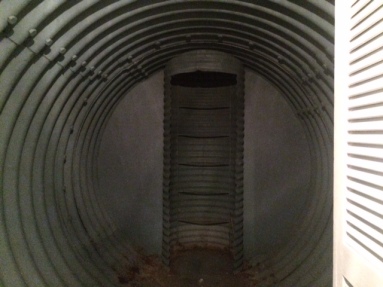 The escape tube pictured above was originally surrounded by bags of concrete similar to this cross-section of ground-fill that covered the bunker.

The President would have been flown by helicopter from his winter residence on Palm Beach Island to the helipad on this island. To get onto the island today, you need to take a water taxi, private boat, or kayak.

A map showing the location of the fallout shelter located on Nantucket Island for use when the President was vacationing in Hyannisport, MA. This bunker is not open to the public.

The Peanut Island Bunker is located in a public park. We got to the island with a very safe kayaking outfit with excellent guides, arranged for us by our hotel concierge, through The Palm Beach Maritime Museum.

There is also a decommissioned U.S. Coast Guard Station on the Island. During the Cold War, if locals asked about the bunker, they were told it was an ammunition depot for this Coast Guard station. 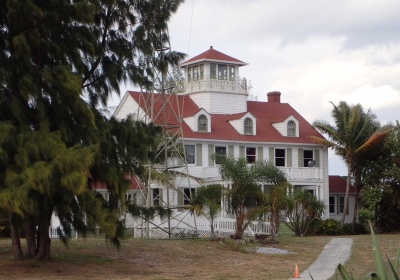 I’d also like to recommend a fabulous historical and cultural bike tour of Palm Beach Island with Leslie Diver of Island Living, Palm Beach. I’ve done her tour twice and have learned something new each time.

18 thoughts on “The Kennedy Bunker, a Cold War Monument in Palm Beach”

Thank you @daddysdogsnash @forestdwelling_storytelling
A message from heaven: “My treasured decorations.” I’ve been in FL cleaning out my parents’ home all week. Thought we were done and then my stepdad said there were a few more things in the attic. Found this. Worth the trip to find a sentimental message from mom in her handwriting.
Morning Veggies. #zucchini #cukes #redonion #summersquash #zephyr #onepotato #beets #zinnia
By @bruceerickaplan for #newyorkercartoons
I wake up so early! If it is anywhere near 5:00, I get up and get going in my backyard kitchen gardens. This morning, I harvested the @villaacres garlic I planted in late October. The lower leaves were all brown and that’s my signal to pull them. They will have to cure for a few weeks before I store them. I cut a garlic ball horizontally so you could see what curing does— it allows the cloves to dry and individuate. By 6 AM, I started playing with the stalks! #backyardgarden #garlic #kitchengarden #growyourownfood
“We Out-SIDE!” Today the women working in the Magdalene Garden started chanting TikTok’s #weoutside which I didn't even know was a thing. Now, I can't get it out of my head. So uplifting. PS the apple tree on the left is loaded!
Loading Comments...