What is not to love about the cranberry?

The berry’s gorgeous, soothing deep red color screams, “Hello, holiday cooking, I’m back!”. The raw fruit is highly acidic and bitter, is easily tamed by simmering in sugar and water (and maybe a few other goodies) to make cranberry sauce,

or baking into a delicious nutty pie,

or sugaring the fruit for a cheery holiday cake decoration.

Once its flavor profile is adjusted, cranberries add a distinct zing that makes it an excellent addition to both sweet and savory culinary dishes and many a pretty cocktail. The round, hard berries, harvested starting in late September lead to a scrupmtion season of delight from Thanksgiving to New Year’s.

My fascination with cranberries began as a child growing up in Southeastern Massachusetts, not too far from the Ocean Spray headquarters. We had only to drive twenty-five miles east to find acres of cranberry fields on the side of the road. My mother loved to stop at the Ocean Spray Cranberry House restaurant to pick up cranberry desserts. It must have been the cranberry zing she craved when she was pregnant and would ask one of us to drive to Wareham to get her a cranberry pastry. 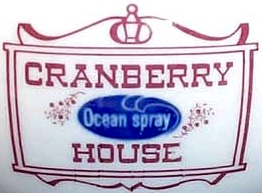 Early New England settlers called the cranberry a crane berry because the fruit’s pink blossom resembled the head and bill of a Sandhill Crane. Thanks to Johnston’s Cranberry Marsh  for letting me use their striking image:

Cranberry fields look similar to other farmed fields in the summer.

It is the idea of what is to come once those fields are flooded and turn red with ripe cranberries that is exciting.

By late summer, you can see the red berries among the green vines carpeting the ground.

In September, the bogs are flooded, and the ripe red berries float to the surface.

If you dissect a cranberry, you will see four interior chambers filled with air and seeds. These air pockets allow the berries to float. The same air pockets cause berries to bounce when dropped and to pop when cooked as the air expands. As a middle-schooler taking Home Ec, our teacher taught us to rinse cranberries in a bowl of water and to only use the ones that floated. I still do that, just as I have never forgotten that we made cranberry jam and biscuits.

Horticulturally, cranberry vines are perennials; some vines have been growing for over a hundred years. Cranberry bogs consist of different layers of soil. The first layer is a naturally occurring clay base. It keeps the ground watertight. Next is a layer of gravel for drainage, followed by a layer of spongy, acidic soil known as peat, and finally, a top layer of sand.

Originally, cranberries were picked by hand. In the 1890s wooden scoops with built-in screens were invented and replaced hand-picking. My friend, Kendra, has a marvelous collection of these harvest implements.

Later, in the 1920s, a “walk behind” mechanical harvester was invented, which is still used today for the ten percent of “dry-harvested” cranberries. These carefully handled cranberries are packaged in bags and sold for baking. By the way, if you are making a recipe written before 1980 that calls for “one bag of cranberries,” they mean a 16-ounce bag. In 1980, Ocean Spray switched to 12-ounce bags after a cranberry shortage. As far as weights and measurements go, a 12-ounce bag has 3½ cups of berries.

In 1960 a “wet harvesting” machine was invented. It required a foot of water piped into a bog to flood it.

Once flooded, the wet harvesting machine crawls over the field and dislodges berries from their vines, allowing them to float up to the surface 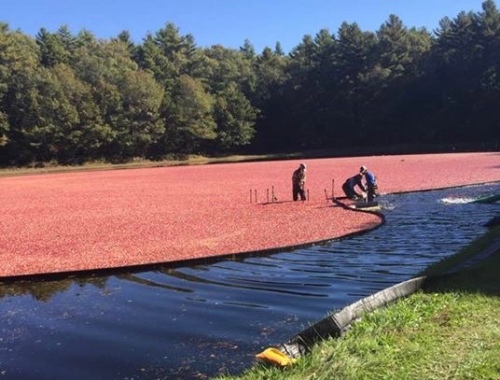 where they can be corralled.

Next, they are “vacuumed” by growers. 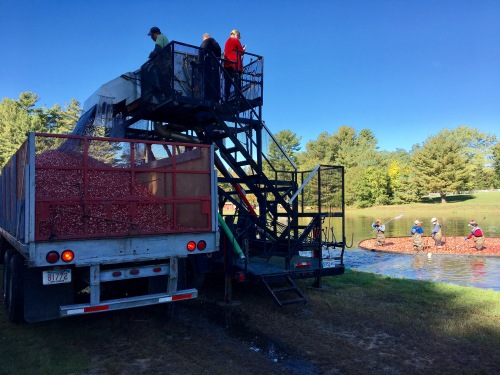 Ninety percent of cranberries used for juices, dried cranberries, and canned sauces are harvested in this manner. 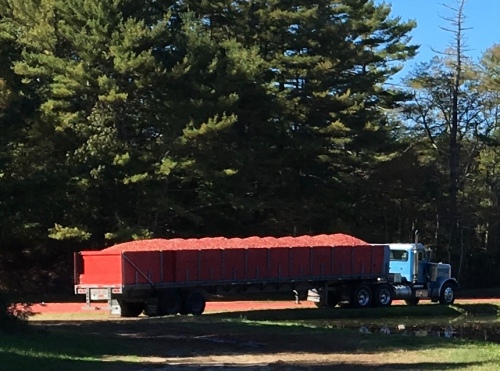 I am indebted to Minda Bradley for photos of her family harvesting cranberries in Kingston, MA.

Sometimes, water is piped in before a winter freeze to protect vines from the cold. As the warm weather arrives, growers drain the fields to allow vines to come out of dormancy and begin their next growing season.

Cranberry plants were traded by early colonists in exchange for goods from Europe. Sailors ate the berries, high in vitamin C while crossing the sea to prevent scurvy. The plants were eventually transplanted to Europe, but soil conditions were not the same resulting in a different acid level and flavor. Lingonberry or English moss berry are examples of the European version of cranberries.

Grower-owned Ocean Spray is a cooperative of over 700 farming families across North America who grow over 60% of the world’s cranberries. The cooperative was started in the 1930s in Wareham, MA. It is a treat to stumble on one of these old weathered Ocean Spray signs nestled on the side of the road in Cape Cod. 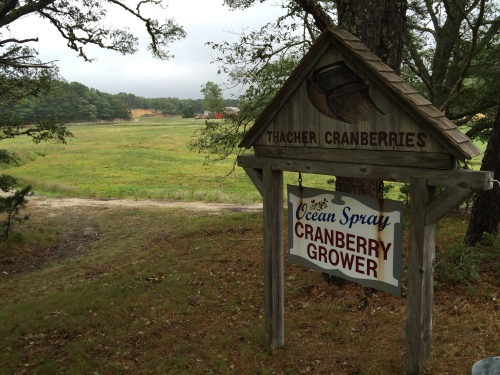 I picked a cranberry vine from a field to back to Nashville, to admire the berries long after I left New England. I tried to get it to root but did not have success. 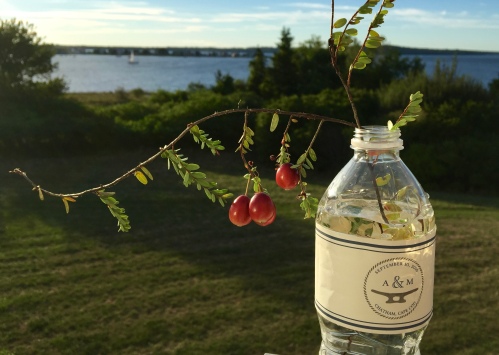 A Cake for All Seasons

Special thanks to my New England friends, Donna and Charlie Gibson, and Beth Hayes, for help with this story.

© 2014-2022 Judy Wright. All rights reserved. Photos and text may only be used with written consent.

Unlike my normal rambling openings, I’m going to cut to the chase.

This was the scene at Becca and Joe’s farm over the weekend. I stopped by their house because I heard the sheep from the Nashville Chew Crew were “working” in their yard and I wanted to show our out-of-town guests another side of Nashville. That Zach Richardson, founder, owner, and chief urban shepherd of Chew Crew was there showing his college buddies his flock in action was bonus.

The Chew Crews’ work around Nashville, “cleaning” fields of invasive plants in a sustainable way, is both novel and legendary having been well documented by The Tennessean and by my delightful and funny friends over at Mason-Dixon Knitting.

What makes the story even better is to see a young man, a Nashvillian, use his gifts and talents to start a successful business doing good in the community. Zach went to MBA (Montgomery Bell Academy) for high school and UGA (University of Georgia) for undergraduate and graduate school where he earned a degree in Landscape Architecture. His area of expertise is targeted urban grazing, a sustainable method of clearing overgrown lots without using chemicals. Zach uses sheep to clear lots. Zach is adorable, spoken like a mother, I know.

Just before Zach arrived, we were admiring the Chew Crew flock at work. Reba, their guard dog, was barking unhappily. It is her job to stay with the herd 24/7 and protect them, with the help of an electric fence, from predators. She saw us as predators.

Zach arrived with his border collie, Duggie. Duggie’s job is to gather and guide the herd of sheep when Zach gives commands.

In this photo, the sheep are waiting for their next command.

These sheep are known as “hair” sheep. All sheep were originally hair sheep, but with domestication, their hair to wool ratio gradually changed to be more wool than hair, if that was the desired trait. You can read more about that at Sheep 101.

In this photo, you can see the fields already cleared by the sheep.

When we were in New Zealand, I thought of another potential use for the Chew Crew: clearing the grass around vineyards. 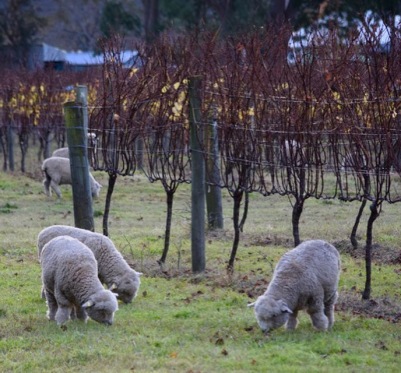 The Chew Crew is comprised of sixty sheep, all ewes (females) and one ram. All of the ewes are pregnant and due in January and February. There is lots of excitement ahead for the Chew Crew team. 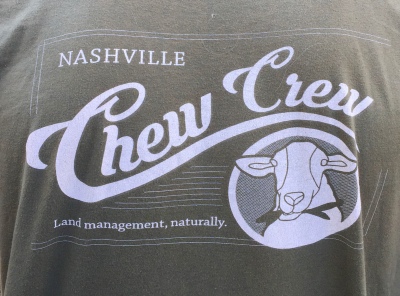 Always check the website for the most current version of a recipe.

Kia Ora from New Zealand! I have so much to write about our trip, but for now, here is a quick story about bungy jumping. 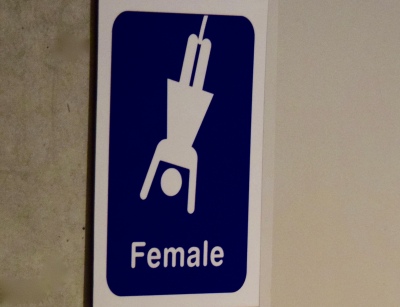 Yesterday, as we were driving along the Kawarau River on our way from Queenstown on the South Island of New Zealand to the mountain village of Wanaka, we stumbled upon the parking lot of AJ Hackett’s bungy jumping operation located near the historic Kawarau Bridge. This is the birthplace of commercial bungy jumping.

We pulled over to check the place out. The Kawarau Bridge is 142 feet above the Kawarau River. The bungy company maintains the bridge which is now a historic landmark. When we arrived, there were no jumpers in the queue, but there were a lot of people on the sidelines assessing the distance between the jumping platform and the river. Definitely shudder-worthy stuff. 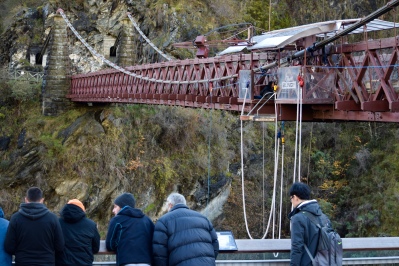 All I could think about was what it must feel like to step off the ledge. I mean people aren’t doing this in anguish. I had just seen a stunning production of King Lear in Wellington the night before. Lear was mad as hell as he stood out on the ledge; these jumpers were jovial. I guess I am not a thrill seeker, but man was I ever intrigued by the IDEA of jumping. So intrigued, I kept trying to photograph the actual stepping off the ledge part, as if, in doing so, I would get a glimpse into the head of a person crazy or brave enough to do something so primal, yet according to friends who have jumped, exhilarating.

As I was busy overthinking the situation, this superhero showed up.

I followed Spiderman out to the ledge/heath/platform to get a closer look.

Here’s the drill on the bungy jumping operation. First, a staff attaches a fail-safe harness around the jumper’s waist.

While a staff member prepped Spiderman, the first jumper of the day walked out onto the platform where another staff member, himself tethered to a safety cord, wrapped a thick towel around the jumper’s shins and ankles (so there wouldn’t be any bruising).  Next, the attendant attached an ankle harness over the towel and clipped on the long bungy cord. 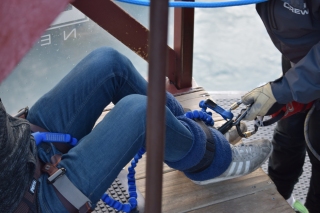 With glee, the guy jumped and was clapping as he did so!  His mates cheered him on. 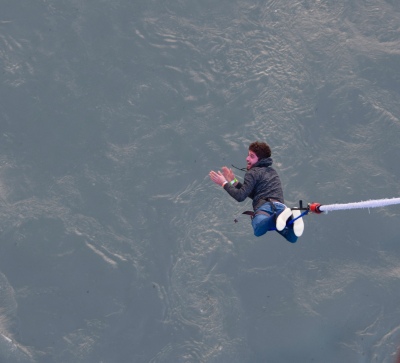 A retrieval boat, tied up to a dock at the foot of the canyon, was right there to pick him up.

The next guy to jump brought his GoPro. These guys were confident. 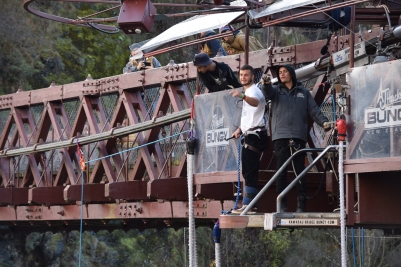 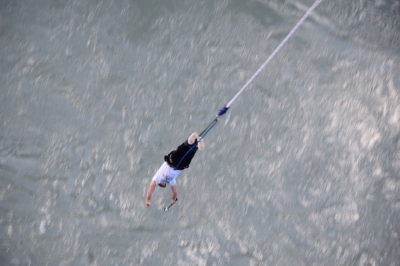 and smile for the camera. Terrifying! 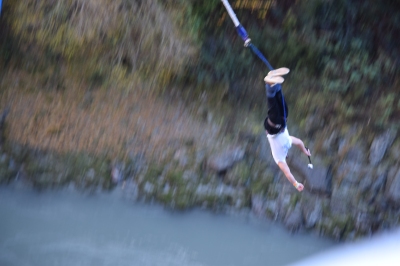 Having checked all attachments, and with a handshake to seal the deal,

I’m glad we made this little detour. No, I did not jump.

Other Travel Stories
The Kennedy Bunker, a Cold War Monument in Palm Beach
Cranberry Love in Cape Cod
The Tobacco Barns of Trigg County, Kentucky
The Sheep of Nashville: The Chew Crew